Medical Termination of Pregnancy (Amendment) Bill, 2020: A directive towards access to safe abortions in India

In India, until 1971, abortion was a criminal act unless proved that it was performed to save the life of the woman. There used to be imprisonment for women who deliberately terminated their pregnancy.

Do you know when and how did abortion law in India first come into force? If, “NO”, here are the key highlights for your reference.

Introduction to the legalization of abortion in India:

When the number of abortions and the associated complications started to increase in the 1960s, the Ministry of Health and Family Welfare (MoHFW) was alarmed. This was the first time when the concept of abortion law first came into being in India. Though it was already present in 15 other countries at that time, but for India, it was the first time.

To draft the abortion law, the government of India set up a committee led by Shantilal Shah. The task entrusted with the committee was to bring in suggestions for drafting the first-ever abortion law in the country.

With increasing awareness and concern for women’s health, many amendments have been suggested and brought into real-time practice after abortion was made legal; the latest being the MTP Bill, 2020.

Why was it necessary to make abortion legal?

In your opinion, was it possible to have a safe abortion without it being legal? Had it been legal, Indian women would not have suffered at the hands of unsafe abortions. Several factors enticed the government to make the abortions in India legal under certain circumstances. Some of these are briefed below along with their significance.

The abortion law in India holds three important segments of the abortion sector to provide women with CAC. These are:

First Amendment to the abortion law in India:

The first MTP Act amendment was instituted in 2002 to be called as MTP Act Amendments, 2002. The key amendments were:

To ease the implementation of the laid down amendments to the MTP Act, the rules were framed in 2003 to be called as the MTP Rules, 2003.

All the detailed requirements for certification of centres and healthcare providers were improved and introduced as the MTP Rules and Regulations, 2003. Reporting and documentation were made essential as a part of these rules.

According to these rules, the DLC composition was suggested so that certification is issued only to the centres complying with the standards laid for them. The guidelines on facilities, equipment and drugs were crafted. Inspection checks, approvals, cancellations were all made comprehensive as different parts of the MTP Rules, 2003.

Second Amendment to the abortion law in India:

Some amendments were further necessary to be brought in the existing laws to further strengthen CAC services to Indian women. After complete assessment of the challenges faced by women while seeking an abortion, Medical termination of Pregnancy Amendment Bill 2014 was introduced.

Some of its key elements were:

Some of the changes were accepted and revised CAC guidelines were issued in 2014. And standardized CAC training package was introduced that included trainer’s manual, provider’s manual, and operational guidelines along with Standard Operating Procedures.

How is abortion law in India, 2020 different from the existing law?

Do you know how the MTP Act, 2020 has brought as a relief for women seeking legal abortions?

There is a room for improvement even with the laws depending on the existing circumstances and prevailing conditions. Recognition and realization of the gap that still existed between safe and unsafe abortions in India led the way towards Abortion Law amendment. The motive for the introduction of the MTP Act, 2020 was to facilitate better implementation of the abortion law.

The step has been initiated to decrease the incidence of unsafe abortions which were on a rise in the country. The notable changes to extend CAC services with the view of providing safe abortions to Indian women are briefed here:

In other incidents where fetal anomalies show up and abortion becomes a requisite, they come up as late as 18 weeks of pregnancy. A two-week window was very narrow for legal abortion also owing to limited sources and providers. And if the duration for legal abortion exceeded 20 weeks, women had to appeal to the court adding to their physical and mental trauma.

Extension in the ceiling age of upper limit for legal abortions was a much-needed amendment for the sake of women health.

Two doctors were required to confirm that the ongoing pregnancy can either endanger the woman’s life or the child be born with physical or mental abnormalities. As a result, many women avoided proceeding for legal abortion. This too changed to single doctor’s opinion for pregnancy length up to 20 weeks as per the MTP Act Amendment. Opinion from two doctors is sought from 20 to 24 weeks of pregnancy. 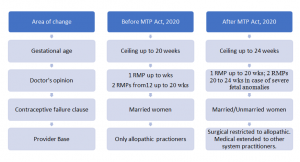 Before and After MTP Act 2020 – Abortion in India

Increasing the upper limit for termination of pregnancy is expected to empower women with reproductive rights. It is believed that the measures taken as per the MTP Act, 2020 will motivate women to proceed for safe abortions.

Women used to feel anguish when they had no control over their reproductive rights. This momentum has now been shifted and it can be expected that the maximum number of unsafe abortions can be switched to safe ones. The right legal move will give an impetus not only to the physical well-being of women but also improve their mental health.

Abortion is a very sensitive issue and the MTP Act 2020 while being empathetic towards women empowers them with making individual conscious decisions concerning termination of their pregnancies.  Moreover, being non-judgemental and with the backbone of the governing law, women in the future can seek Comprehensive Abortion Care at certified MTP centres.

The welfare of women and entire societies depends largely on the governing laws. The new abortion law can be considered as more progressive towards addressing the safe abortion needs of women.

Note: The content on this post is not to be taken as a legal directive or advice.  It is meant for information purposes only.